This week Vicki, one of my awesome colleagues and the one who owns beautiful Belle, 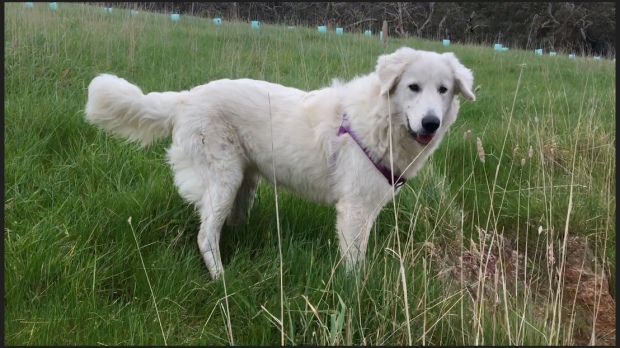 Before Vicki began playing the video to her class, she explained where the video was shot and then said added that there was just one problem; the video is all in Indonesian and Vicki doesn’t speak enough Indonesian to understand it! Vicki then played the video and afterwards asked her students to write a retell to explain to her what the video was about.

Most wrote in English but a few chose to write their retells in Indonesian!! For most students, this was the first time they had seen the video and their retells demonstrate high levels of comprehension. Those who chose to write in Indonesian also did an excellent job. One of Vicki’s students, Taylah, follows my channel and had watched the Belle video several times during the holidays. I bet you can pick which of the following is hers without even needing to read her name!

I have had so much fun making i+1 (at my students level with just 1-2 unfamiliar words) videos for my students. I was inspired to do this after watching Bu Anne’s videos on her YouTube channel Indonesian Fun For Juniors. Most of my videos on my YouTube channel were created pre-TCI and the language used is either English or incomprehensible (for my students) Indonesian. The final catalyst that resulted in me creating TCI videos was my 2017 trip to Agen when I backed myself into a corner by telling my TRT (substitute) that I would be posting videos for students to watch and Listen & Draw while I was away.

Before I left Australia, I asked a couple of classes what they’d like me to include in my videos and that really helped me include topics of student interest. Student requests ranged from pigeons to the Eiffel Tower! Taking the video was the easy part surprisingly; the most time consuming and challenging aspect is the narration.  Sometimes I really needed a word yet to be acquired by students, so I added it as a subtitle with its English translation.

I’ve since returned to Australia and have had fun exploring how to make videos from PowerPoints which are considerably easier to narrate but harder to locate appropriate visuals. My latest idea (which I will work on soon) is to use student illustrations instead, however this can only be done towards the end of a story. Then the next challenge will be to take a ‘leaf’ (cut?) from Alice Ayel’s YouTube videos and draw the pictures myself! For some reason, this is extremely challenging for me because I am the world’s worst drawer. In Indonesia, on our way home from the 2017 Agen conference, Annie & I spent a day with Ibu Mia at her school. In one class, I drew a camel – we were talking about speed humps (polisi tidur) – and my camel picture had the entire class in puzzled laughter! I had to ask for a volunteer to draw one for me!!

My latest video is called Belle Mau Punya Teman (Belle Wants a Friend). Belle is a gorgeous pup who belongs to a colleague and the idea of creating this video came to me while I was house sitting during the last holidays. Vicki lives in such a beautiful spot and has a variety of animals that it was a no brainer to collect video on my phone while I was there. Once I had the footage, I opened iMovie and started making the project. I had no idea of the video title while videoing; that came to me when going through the footage. When I make videos this way, I don’t have a script; I simply reduce the volume of the footage and narrate straight into the project and the storyline develops as I go. Consequently, the dialogue takes a lot of editing in order to keep inbounds (using only language my students know), staying SLOW and fitting the dialogue to the footage clip. Quite a tricky balance.

Have a watch and see how it turned out:

Agen has been absolutely amazing! In 15 minutes, an evening coaching session is starting downstairs in our hotel which I’d really love to get to, so hopefully I can quickly squeeze this in before heading off!

I would like to blog about the sessions I’ve attended here at the TPRS Conference in Agen, both to clarify my own personal understanding and also share what I gleaned. I hope I can do them all justice and explain them clearly.

At today’s workshop titled Using Films With CI, Judy Dubois had us all sitting in a circle in one of the rooms at the school situated behind the gorgeous Cathedral de Caprais. Pic

Behind Judy, through the window, was the back of the cathedral; so gorgeous. 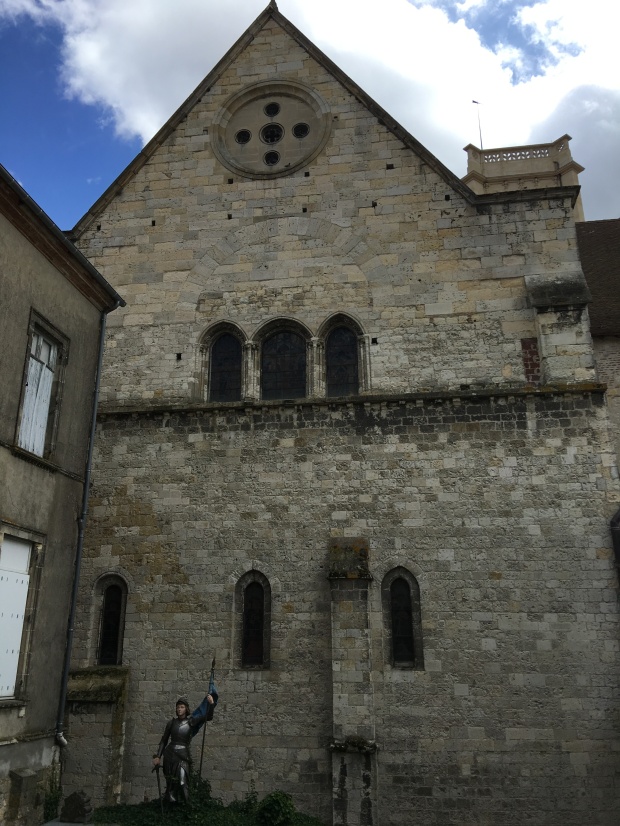 Judy began by asking us who has ever used film with their classes and several people raised their hand. She next asked all those who have, to share their ideas. Here is the collection I noted that I believe would be successful with primary aged students:

Anne Cedeno shared this on the CI Liftoff Facebook page today for those days when class sizes are drastically reduced due to inexplicable school events:

This idea came from Sr. Wooly’s workshop at NTPRS last summer, and might be fun and better managed with the reduced group size: Each team of 3 kids needs one video recording device (smart phone or iPad will work well); one student will film and the other two will be actors. Focus on basic verbs (super 7, sweet 16, etc.) student plan a simple, school appropriate plot for a SILENT MOVIE they can film at school during your class, using features of the school (stairway, cafeteria, window, etc) and simple props that you might provide or they can bring in if they plan one day and film the next. Filming happens in short (max 6-10 second) clips (using iMovie or AdobeClip). plot needs to focus on simple things like where the actor is, what they have, what they want (the problem) and where they go (to try to solve the problem). Since no voices are recorded, it totally eliminates bad pronunciation, and puts the emphasis on the kids to show emotion and plot through facial expression and gestures. Then the video clips need to get shortened down to the essence of what shows the essential plot and the product is a 1-2 minute silent movie for you use for movie talk, staring your own students – My kids recently got iPads, so I’m planning on doing this soon. School-appropriate humor, unexpected surprises/plot twists will be encouraged:) In years past, when my students filmed each other acting out scenes from a novel, etc. the downside was always the pressure they felt about their pronunciation in L2, which lead to many many retakes – but Sr. Wooly’s idea to make it a silent movie eliminates that pressure and lets the kids focus on the fun/teamwork to create the movie and then as a whole class we can Movie Talk 🙂

One of the blogs I follow is Brilliante Viernes by Maris Hawkins and often she shares links to sites she  has discovered. It is such a cool idea!! Lately I have found so many brillant posts and sites, that I really want to share them with you. If you like this format, let me know in the comment section below!

How cool is Senor Wooly? He has made lots of resources for students & spanish teachers  who for a fee, can access them all. The videos are fabulous and while designed for high school students, are so humorous, they would appeal to primary students equally.

Have you heard of anyone creating resources such as these for Indonesian students and teachers?  Materials which are engaging and compelling for students and provide the perfect medium for providing comprehensible input in the Indonesian classroom. If so, please add a comment below.

A huge thanks to Brent, our tireless and thoughtful INTAN president, for sharing this brilliant video!

Most CI teachers rave about Movietalk. Movietalk is using a short video/film as an engaging method of sneaking in repetitions of specific target structures. Martina Bex has a very detailed explanation on her website. Catharina mentioned in our last Skype call that her students (junior primary) absolutely love movietalk and constantly ask for another one. It was a technique that I was both been very keen to try and yet was also apprehensive about trying it. While I knew students would enjoy watching and talking about a movie clip, I am aware that my students only have a very small pool (puddle) of acquired structures and also that I am still a real TPRS beginner!! Circling, PQA etc are TPRS techniques I am still developing and the idea of doing them all on the fly about a video was slightly intimidating. So, I read up about it, looked at  video clips recommended by other teachers and put it in the ‘maybe later’ basket. Then on the moretprs listserve, this Mr Bean video was posted as a good Movietalk option. As soon as I saw it, I was struck with how perfectly it supported:

So on the weekend I watched the video and took some screen shots to make up a smart notebook file. This way unfamiliar vocabulary eg towels, bathers, shirts, toothbrush, toothpaste etc could be labeled and thus be easier for us to talk about them without needing to lapse into English. 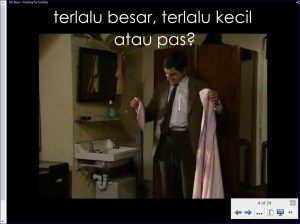 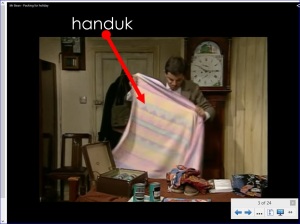 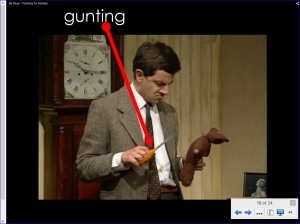 I also wrote up on the board some vocabulary that would help the discussion but is not a focus:

Finally I felt comfortable enough to dive in the deep end and attempt a Movietalk.

On Wednesday, the year 3’s were the first class to do a Movietalk with me. Together we went through the notebook file, talked about the screenshots and then watched the movie. Thank goodness it was the year 3’s who were my guinea pigs!! For various reasons, the notebook collection of screenshots was not that successful. Mostly because the quality  of the pictures was poor which together with a fading smart board bulb meant students had difficulty grasping what we were talking about! I realised towards the end of the lesson while we were actually watching the video, how much better and easier it would be to watch the video and just stop it when needed.

So with the year 5’s, I did just this and it was brilliant. Students really became involved in the discussion and the repetitions of the above structures were brilliant. The story line was much clearer and students got far more involved with the craziness of Pak Bean.

So if you too, are keen to have a go at Movietalk, read up about it on Martina Bex’s blog, watch a few YouTube clips of teachers demonstrating Movietalk (watch this or this) and then search for the perfect clip to try it with.  If you have trouble finding a clip for specific target structures, I recommend asking the moretprs listserve or joining Ben Slavic’s website. Both provide awesome TPRS support.