For the second year in a row, I finished with a cooking recipe instead of a story for the year 6/7 classes. This cooking unit is a tradition with my year 6/7 students and it is the only pre TCI/TPRS unit I haven’t binned! This is for several reasons: Firstly it is a food based theme which students constantly love and therefore hopefully is becomes a memorable final unit for my year 7’s before they head off to high school and secondly it ties in nicely with our annual end of year school pasar (market).

As this is a unit I have done with my upper primary students for as long as I can remember, it has been tweaked significantly over the last 2 years as I continue to make it more TCI friendly. Last year was my first attempt which you can read about here. This year’s tweaking though was much more successful (in my opinion) which I can only put down to my ongoing reading and listening to all things TPRS/TCI.

The biggest improvement came quite simply; tweaking the recipes that the unit is based upon.

I always begin this unit by asking each class to brainstorm for recipes they would like to cook. Then the class votes on them all, knowing that the recipe will  be cooked twice; once for students to eat and enjoy themselves and then again to sell at the pasar.  Students suggested dishes are usually based on food they have enjoyed at previous pasars’ or dishes they enjoyed eating that had been made by visiting Indonesians. This year the 3 6/7 classes chose 3 totally different recipes; mie goreng telur Ala Ibu Mia (yummy savoury noodle pancakes), dadar gulung and klepon.

Once each class has decided on what they want to cook and sell at the pasar, I find a recipe for it because the unit of work for each class is then based on that recipe.

This year when I dug out the recipes, I was horrified with the amount of unfamiliar vocabulary each recipe uses! This became my first job – to pare down the recipe to its most basic form and to incorporate as much acquired language where ever possible. Unfortunately with recipes, what cannot be altered, is the list of ingredients and one recipe had 10 ingredients, most of which were unfamiliar!

Here are the stages that the method part of the dadar gulung recipe has changed over the past 3 years:

With the 2016 recipe adaptation, my focus structures became taruh (place/put), aduk (stir/mix), piring (plate) & wajan (frypan). Words like ‘inti’ are not high frequency, so I simply had the translation for that and other such words posted up on the baord to assist comprehension and reduce confusion.

My second task was to introduce the list of ingredients. With dadar gulung, there are 10 ingredients! In order to get as many repetitions on each ingredient, I created power points, showed students the ingredients, let them taste, smell & handle the ingredients where appropriate (tasting coriander was not very successful but it sure helped them to remember it), Plickers & played the drawing/matching game I outlined in my 2015 post.

I love using PowerPoint when introducing new target structures. I go crazy with the transition features whereby you can have a picture/word on the screen and then with a touch something is added or changed to the page in a quirky way.  Most pages have 3 items which with a touch are layered onto each page. This included the English and Indonesian word for each ingredient and a picture to clarify meaning. The order that each came up on the page varied but generally the English word appeared last. The PowerPoint is then not only useful for introducing a list of new words but also for reviewing the list. To keep up the interest, pictures can be changed, slides rearranged and transition styles altered. Including pictures of past students is popular although can be distracting! Here is a link to the PowerPoint I used for dadar gulung.

While the main target structures for all 3 class recipes was ‘aduk’ and ‘taruh’,  ‘piring’ and ‘wajan’ were purely support/minor target structures, I was amazed to discover at the end of the unit how the acquisition of the former was sketchy and needed a few gesture prompts yet wajan and piring needed no such prompts. In fact students were using them in their English discussions while cooking!

For the first time ever, on the day of cooking, I only handed out the Indonesian version of the recipes to groups. The only person who received an English version was the group support person if they had one. Groups that invite a support person (older family member/friend) are permitted to cook elsewhere in the school which I encourage as it reduces the power load in my classroom and hence the overload switch cutting off power! I was so impressed with the groups that remained in my room and their successful comprehension of the Indonesian recipe.

Unlike last year, I was extremely pleased with how the cooking unit progressed this year, especially considering it is such a busy time of year. Reducing the unfamiliar vocabulary down to just aduk & taruh made such a difference. While aduk isn’t high frequency at all in the classroom context, ‘taruh’ certainly is and consequently I have already started incorporating into my lessons with the younger students.

I’ve also thought about the idea of having a year 6/7 cooking text that younger students work towards in Indonesian class during their 7 years of primary school, so that many of the words like ‘taruh’, ‘lipat’, ‘gulung’ can be built upon in a more challenging text. 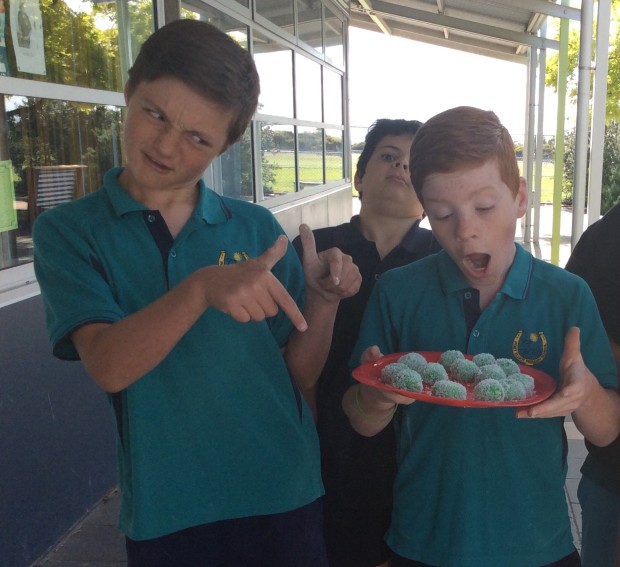 One thought on “Tweaking a pre TPRS cooking unit – again…..”