Last Friday night, the SA World Teachers Day Awards Ceremony & Cocktail Party was held at EDC in Hindmarsh. During the ceremony, it was explained that while World Teachers Day is celebrated internationally on October 5th, in SA (and other Australian states), it is celebrated on October 30th so that it falls midterm rather than during the school holidays. World Teachers Day  was established in 1994 by UNESCO to “acknowledge the important contribution made to our community (by teachers) in an increasingly complex, multicultural and technological world.” Source: education.nt.gov.au

While traveling last holidays, I recieved an email from CEASA confirming my nomination for an award and inviting me and 2 guests to attend. I immediately added the date to my diary and began wondering what does one wear to a cocktail party?

Upon our return to school, the principal had included into our weekly staff bulletin the news of my nomination with the following information:

I was so pleased that Brenton had included this information because when I spoke to my Dad inviting him to attend, he asked me why I’d been nominated and I realised I didn’t know! I was  just so chuffed to be nominated, the why hadn’t occured to me!

So you can imagine my distress and disappointment when I woke up Friday morning severely unwell. I rang my Dad in tears and after quizzing me on my symptoms (viral and not flu was his diagnosis), he recommended paracetamol and bed rest. I did as he said and woke several hours later feeling that the hour drive to Adelaide was now manageable. I got ready, packed an overnight bag and headed off. I got as far as Port Noarlunga and just had to stop. I was sooo tired and all I wanted to do was put my head down. I debated briefly with myself and decided that it was better to keep going and have a decent nap on my arrival into Adelaide. It was the hardest drive I have ever done. I finally arrived at my daughters flat where she took one look at me and put me to bed. She woke me an hour later and we headed off to collect my father, who it should be mentioned, usually avoids sick people like the plague!! (ha ha) It is a testiment to how proud he was that he accompanied us at all.

The award ceremony itself is a blur. The room was set up with chairs facing the front lectern. The front chairs divided in half with one side for award recipients and the other for important guests and award presenters. The back section was for invited guests and that is where Dad & Bec sat with my phone to photograph the action and atmosphere. I sat in a row of 5 people and felt very rude not talking to them but I was so conscious of being contagious. I later realised that I had spent the morning castigating whoever had shared this virus with me for daring to step foot outside their front door when so ill and here I was doing just that! I really hope I was able to keep my germs to myself that evening!

Sonya Feldhoff (891) was the MC and she did a stirling job. After short speeches by various stakeholders, the awards were presented smoothly and swiftly. One by one, each row of awardees was invited to stand and wait in the ‘wings’. As Sonya read out our name, we walked across the ‘stage’ to Susan Close, the Minister for Education and Child Development, who was ready to present us with our certificate.

Together we then turned and faced the cameraman who was sitting in the front row and then in front of everyone, smiled with the certificate front and centre. I was able to do all but the smile, and I am dreading receiving my official photo because my face just would not cooperate!

I returned to my seat and spent the rest of the evening alternating between struggling to keep my eyes open and checking my watch. It was with great relief that the ceremony finished half an hour earlier than scheduled. I quickly searched for Dad & Bec who were enjoying a glass of red. They took one look at me, put their glasses down and we turned to head down the stairs. Going against the throng who were heading for the promised food and drink, we ran into Brenton, Julie & Andrea representing INTAN. They begged for a photo before we headed off and I was grateful for that because I too wanted one yet was uncomfortable about transmitting my revolting virus to either the president, the vice president or the secretary of INTAN who had so generously given up their Friday evening to witness the ceremony.  I sincerely hope my zombie-like state and early departure in no way interfered with their enjoyment of the evening!! 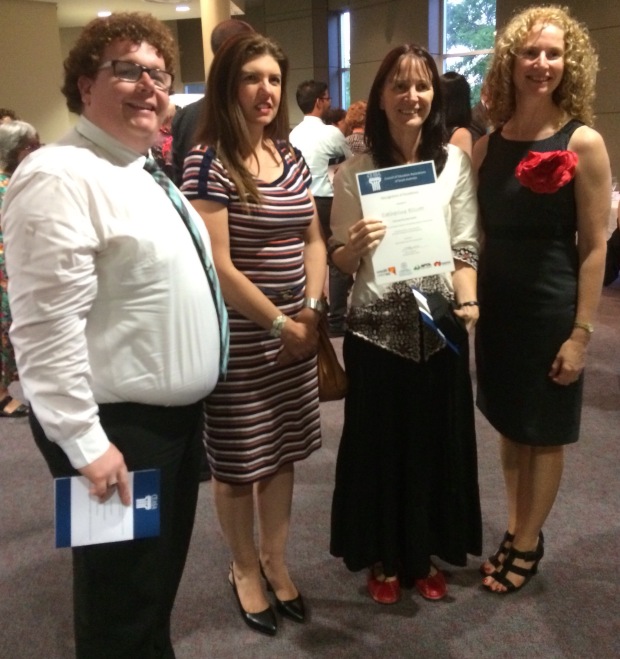 Thankyou INTAN for nominating me for the 2015 Gotong Royong Award. It was such an honor to receive this award and I am truly humbled to have been acknowledged by such a wonderful organisation. Receiving the award has helped me realise just how lucky I am to have a job which incorporates my two passions – TPRS and Indonesian. Terima kasih sebesar besarnya teman teman di INTAN.